According to Euromonitor, an independent provider of strategic market research, in 2013, baggage fees contributed worldwide to 20% of total revenues of airlines. This explains the attention paid to luggage management, which is generally carried out in parallel with that of passengers. We understand why it is so essential to get as little loss as possible. The US Department of Transportation publishes monthly reports to help consumers with information on the quality of services provided by airlines. These documents are generally released by the end of the second week of each month, including statistics on flight delays, consumer complaints and improper handling baggage:

In March 2017, 2.24‰ complaints were registered on US national airlines for loss of luggage, a decrease from the previous month but with a declining volume of traffic. However, in the first quarter of 2017, the number of complaints of 2.59‰ is also down from the previous year. Loss of luggage is in 3rd place among all categories of damage. Comparisons are misleading, but we can see an equal effort to reduce the loss of luggage in airlines and infant mortality around the world. Note that the figures obtained for different countries correspond to the degree of technological and capitalist development of the different airlines, those with a higher level of loss eventually disappearing or being absorbed by the best companies. 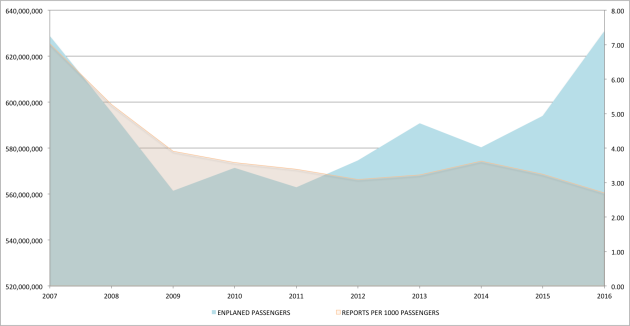 On the other hand, if these metrics are provided according the number of complaints, many passengers are putted off by procedural difficulties. Alternatively, airlines are free to invoke a limit on their proposed settlement, under the 1999 Montreal Convention basis. Current limits are $ 3,400 per domestic passenger and 1,131 special drawing rights ($ 1,500) per passenger for international flights. The handling market represents $ 2,74 billion in 2013 and expect growth of 2,1% through 2023 (The Global Airport Baggage and Cargo Handling, Frost & Sullivan, 2014) :

Baggage handling is essential to airport operations and can cause complications in the event of failure, ranging from serveral passengers not receiving their bags to widespread disruption of airport operations, including flight cancellations and the ensuing domino effect on both airlines and passengers.

Meanwhile, the situation depends on both airlines and airports. Big hubs have invested in modern handling systems that includes screening technologies. However, failures increase with traffic, while in so many countries in Europe, most airports can not provide the same level of reliability in baggage handling. The European Union has more than 150 airports with a normal capacity of more than one million passengers per year. While mega air hubs such as London Heathrow, Paris Charles de Gaulle and Frankfurt account for a disproportionate share of total passenger volume, smaller regional airports retain their importance, carrying more passengers in 2015 than airports on each 5 to 10 million and 10-20 million normal capacity of passengers:

As traffic increases, the level of risk at an airport increases as well. For example, a cyber attack on the airlines or airport management systems could seriously impact and disrupt the air traffic for a long time. As a result, airport invest in security equipment (physical security) as well as cyber security to prevent security threats.

Because of this contradiction, it is not possible to consider much lower loss rates in luggage management than those currently observed:

By successive manipulations, the barcodes are damaged, torn off or erased […] this then makes fall the reading rate to 70%.

For the far-sighted traveler, it is important to protect himself against the loss that inevitably involve luggage handling, especially since the loss of its own bags does not stop at the exit of the last airport. It is fortunately possible to avoid the nasty surprises with a new tracking system that you can download on our website.